Selba Guersenzvaig is the winner of the spanish Diplomático World Tournament, one of the most prestigious and international cocktail competitions. She will represent Spain in Venezuela with a cocktail that embodies the dreams of Don Juancho, the same drive that has taken this young bartender to the top. And that’s only the beginning… 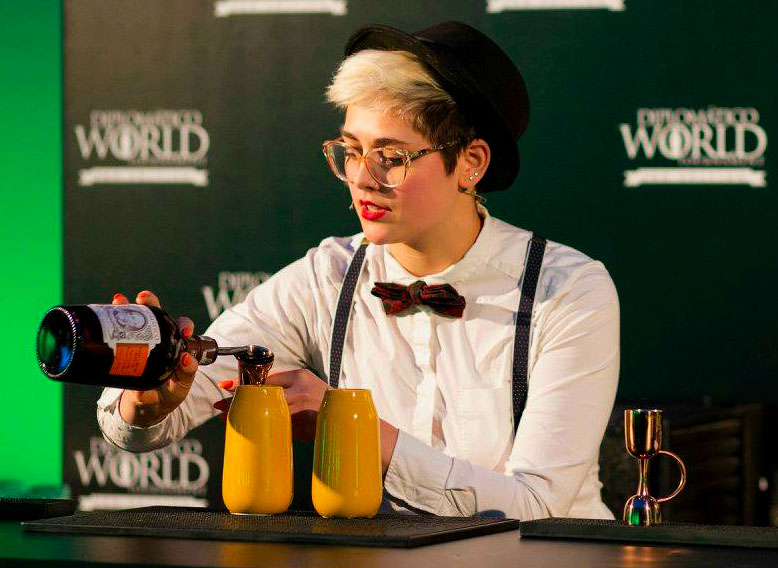 How did you get into the cocktail world?

I started working in hospitality to be able to pay for my education, the degree in Modern & Contemporary Humanities. It was in Ajoblanco (Barcelona), with Cristina Bruno and Raúl Rexach, when I discovered my passion for cocktails. After I got the 3rd national position in a cocktail competition, a whole new world opened up to me and I dived deep into it; since then I have been self-taught. After working a season at Apotheke-Ocaña (Barcelona), where I grew professionally, I recently joined the team of Macera Barcelona, inaugurated this month of March. There, with Cristian Pineda, and with a concept of a quality, responsible and homemade product, I plan to continue to grow as a bartender, without leaving aside my university education.

First of all, congratulations for being the winner of Spain Diplomatico World Tournament. What were your first feelings when you heard your name?

Thank you very much! Honestly, and let me use a cliché here, I couldn’t hold back my tears. The excitement and adrenaline we experienced in the final of Diplomatico World Tournament was sensational, and seeing the fruit of one’s sacrifice and effort is something very satisfying. Furthermore, I’m going to Venezuela! Leaving aside how much I love traveling, again I am being given the opportunity to challenge myself, develop professionally and meet more bartenders with their different points of view. This is truly why I like to travel: the anthropological contrasts given between the different cultures are present in all kind of circumstances and the cocktail-movement is an excellent example.

Do you think women are finally conquering the world of cocktails or cases like yours are still an exception?

I think the fact that there are more women present in the cocktail sector is fundamentally an expression of a general trend, women are achieving the position in society they deserve. It is undeniable that throughout history women have lived under oppression, and this has just begun to change, really since less than a century ago after many centuries of inequality. Bearing that in mind, our presence in the sector is certainly visible. I dare say, from experience, and I think that more barmaids will agree, that our gender is still a factor that is taken into account in our professional career. In the same way, along with the congratulations for our respective achievements, there are comments that still underline the fact that we are women. And that is why I ask myself: won’t we be able to say that true equality has been reached, precisely when we are surprised by a woman’s achievements, regardless of her being a woman?

The Diplomático competition was developed in English but in Spain it’s still hard for us in to speak English in public. What do you think about the fact that more and more competitions are asking for presentations in English and how did that go for you?

I think that the lack of English in Spain is a big problem and it comes mainly from education. In today’s globalized world, linguistic diversity and English in particular are undoubtedly significant.

As far as the hospitality sector is concerned, I think it is essential, mainly because a large part of our sector is driven by tourism. Consequently, to me the competitions in English seem a good initiative: they stimulate the intercultural relationship and encourage bartenders to improve their English in case they aren’t fluent already.

Personally, I have had the luck to have been educated by parents of cultural diversity and with a lot of respect for art, so for me dubbed films have never existed; thanks to this I grew up bilingually and that is why, among the millions of things I was nervous about, English wasn’t one of them. 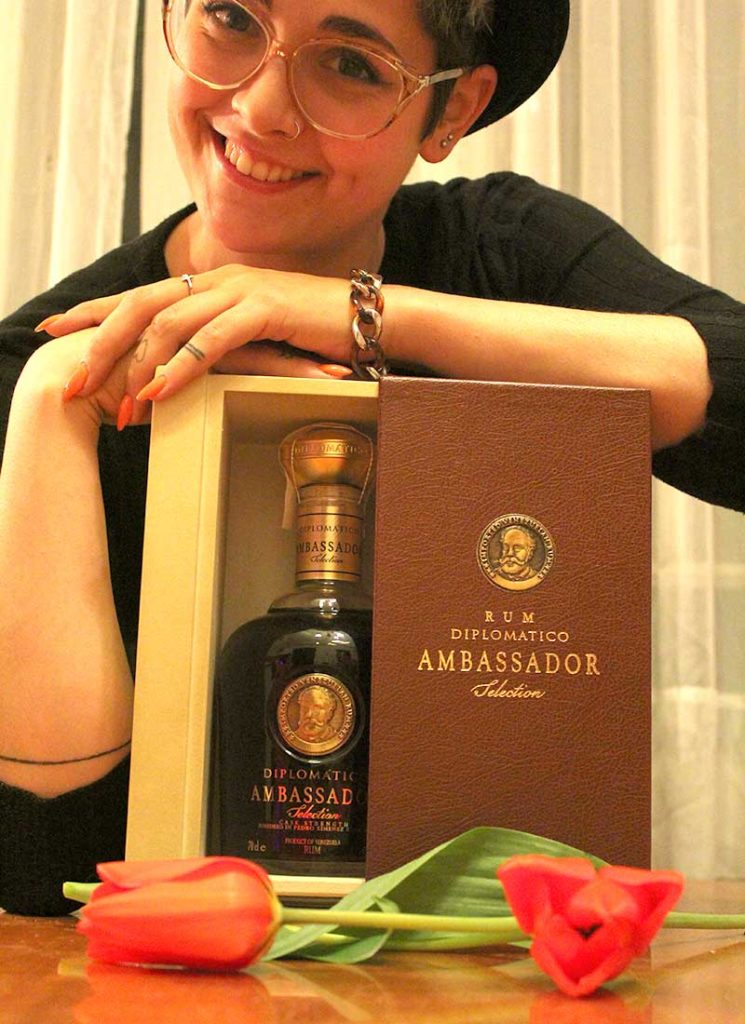 Do you think that languages ​​and image are a competitive advantage for a bartender and that they could weigh more than the profession itself?

After my previous answer, I think my love for linguistic diversity is clear! Yes, I believe that languages ​​are important and that they definitely are a competitive advantage, especially now that international relationships are increasingly solid and communication is crucial. On the other hand, I believe that the image of the bartender is part of a larger concept; I think that a pleasant presence, composed of different factors, is necessary for anyone working in the service sector. That said, it should be kept in mind that the visual component is the first communicative exchange between the professional and the client; you have to know how to adapt —and excuse the redundancy— the image to the image you want to project. All in all, it is not about the image itself, but about what the professional transmits through it.

Are you a rum lover? What is your favorite spirit or spirits as a consumer and bar professional?

I am definitely a rum lover!, both personally and professionally. Nevertheless, my perfect drink is defined by the situation in which it is created; the place, the moment, the company, or the bartender that prepares the drink. Also, in the same way I like to express my creativity, I like to taste that of others; Where I find myself with a uncommon menu, or with an inspired bartender, I try the cocktail that seems most peculiar! Having said this, in addition to rum (like a golden one in a Between the Sheets), I really enjoy Rye and Brandy or Cognac, especially when it’s in a good Sazerac or a Vieux Carré.

In the rum world, what styles do you like the most?

It depends, firstly, on whether it is to have straight or mixed, although it is because of this same distinction that I like to work with versatile products. It should also be said that behind the bar each drink demands a different rum: to make a Mai Tai I would use a Jamaican rum and a Agricole from Martinique, while for a Latin Manhattan, for example, I would choose more of a Spanish profile rum, rich and round. Actually, we are so lucky the rum world is almost infinite! We have a market that is defined by a variety of high quality products, which allows us to choose one rum or another depending on what we are looking for. As for my personal preference, although I enjoy different types of rum, as I said before I tend to lean towards the golden Spanish style, and I like the profiles with character and distinctive flavours.

How do you see the rum situation in Spain? Do you think that it will increase its consumption or that it will not be able to surpass other spirits like gin or whiskey?

The rum culture in Spain needs stimulation and it seems that, although generic brands have decreased (mainly due to the Gin & Tonic trend), according to the numbers, the consumption of premium and super premium brands is rising considerably, something that’s also happening with whiskey. On top of that, although the G&T in its moment took the protagonism away from rum, it has also contributed to increase the interest in spirits and cocktails. Both professionals and the general public are willing to learn more about spirits, like in the increasingly common tastings or pairings.

How could it be introduced to the general public to consume more and better rums?

I think a very positive way to introduce quality rum is precisely through cocktails. By this I mean classic cocktails made out of few ingredients, where the rum can be perceived without difficulty and the brand choice has a significant effect on the final result. Thus, for a public that’s still not ready to take straight rum, you can make a good Old fashioned or the already mentioned Latin Manhattan.

In turn, good results have been shown with the rise of different events: tastings, trainings or gastronomic experiences. With this I refer not only to the public, but also to the bartender; it is necessary to train them, enabling them to transmit this same knowledge to the client.

Tell us about the cocktail that has led you to become Spain’s Champion.

My inspiration came from the desire to make an allegory to the criollo origin of Juancho Nieto Meléndez, the founder of Diplomatico Rum, who represents the perfect balance of the combination of the native Venezuela and the European origins. I thought there was no better way to express this in taste, than by using a traditional Central-American drink, that was made a long time before the arrival of the colonizadores: Atole. It’s a water based and heavy bodied drink made of corn, that was, indeed, the most basic element in the original Central-American food. In addition, corn is the base of bourbon, and Diplomático has rested in its barrels for months. Moreover, and to remember the impact of the merge between Europe and the american continent, which stimulated the establishment of mantuanos, I chose an ingredient that was brought to Venezuela by the Spaniards, and that has actually, turned into one of the most staple, fundamental ingredients in its gastronomic culture: Tamarind.

Furthermore, I added malt extract, a typical caribbean drink. This is not only to enhance the malt that is in the complex character of the rum as a consequence of these earlier mentioned 8 months in whiskey barrels, but also to enhance the molasses flavor of the rum, as malt and molasses have similar caramel notes. In the same line, and to put this all together, I finally listed Diplomático Mantuano’s dry fruit notes, adding some drops of black walnut bitters.

The name “Imagine” suggests a well-known quote, you may say I’m a dreamer, but I’m not the only one, and this is because what made Diplomatico Rum possible was, without a doubt, Don Juancho’s dreaming spirit. 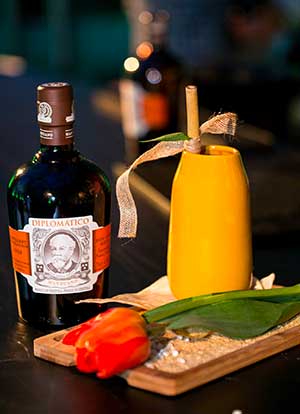 Mix all the ingredients straight in the glass and add ice. Stir for about 10 seconds and serve.

How to make Atole: Dilute 50gr of cornstarch in 750ml of water and boil. Lower to medium heat, and add 150gr of white sugar. Stir for 5 minutes to obtain thickness and remove.

What are your expectations for the European final? Are there any opponents you see as favorites?

First of all, I consider myself very fortunate to be in the place where I am. Diplomático rum has given me the opportunity to grow personally and professionally and to live a unique experience; going to Venezuela and representing Spain in the European finals is really amazing. Clearly my expectations are to give my best, challenge myself, learn from the experience, and above all, enjoy myself.

About my colleagues —because we are never really able to see ourselves as opponents— although I have no favorites, I have seen that their level is very high; which is kind of obvious considering that it is at an international level. And you know what? It’s the best thing that could happen to me, since the day I knew I wanted to become a bartender, I knew the ones I would learn from the most, are my colleagues.