While the name “Baï” may not immediately ring bells for you, bars and bartenders imitate her mug and tiki bowl designs the world over.  In tiki joints from Los Angeles to Chicago all via Paris, you’ll most certainly find her creations.  But who is Baï?

France doesn’t know how lucky it is. Here on local soil, reside the only French tiki ceramist and illustrator.  This artist has had a passion for tiki well before the trend returned in full force, even before the existence of Paris’ most famous Tiki Lounge, Dirty Dick.

Baï studied design and graphic design. She worked for some time as an illustrator for magazines and children’s toy brands. But in 2005, a little by chance, she fell head over heels for Tiki.

A woman ready to immerse herself in her passions, Baï decided to leave behind her current work to take ceramic classes. She absorbed all the Tiki knowledge she could and also made some great contacts, including Dave “Squid” Cohen, who supported her in her desire to make a living thanks to her passion for Tiki.

She found inspiration in books such as Sven Kirsten’s Tiki Modern or from William Westenhaver, artist and craftsman of the twentieth century who helped popularize Tiki in American homes. He applied himself to the creation of tiki style furniture in the fifties, which added fuel to the fire that was tiki.

What Baï loves in this universe is an absence of elitism… Tiki is a way to create an escape from the monotony of everyday life, everyone can create their own Tiki universe at home. And that’s the true, original, definition of this culture inspired by Polynesian islands but created in California in the first half of the 20th century: an escape for the average American.

Tiki in space and time

There is no doubt that Tiki was conceived to be eternal, influenced by style rather than fashion. However, it fell out of favour in the late 1960s. It was not until more than 30 years later, in the US, that it came back into popular culture via tiki cocktails, one of the few survivors of the movement. Until the 1960s, Tiki was found in hotels, movies, restaurants, bars, furniture… it really was a way of life.

We owe the return of the Tiki to artists and contemporary writers who have worked hard to rekindle its flame. Such as Jeffrey “Beachbum” Berry.

Almost half a century later, in 2008, when Baï decided to live her passion, Tiki was an unfamiliar word in France, known to only a handful. The cocktail had not yet come back in full fashion yet, so it is was nearly impossible to find a decent classic, let alone its more flamboyant cousin the tiki cocktail…

The ‘supply’ was slowly coming back into existence at the time … but what of the ‘demand’?

Things started looking up 5 years later, with the Tiki Pop exhibition at the Quai Branly Museum where Baï had the chance to exhibit her creations. Dirty Dick and Tiki Lounge are, for now, the only Parisian bar flying the tiki banners.

Today, you will find Tiki bars all over the world, where staff in shorts and floral shirts serve the best cocktails – usually rum-based – accompanied by relaxing music and ambience.

Baï the only French Tiki ceramist

In this era where “Made in France” is advocated and where many people leave their “bullshit job” to go into crafts, it was impossible for us not to find Baï fascinating … It is the simple extension of the excellent work of the rum producers and passionate bartenders. After all, your rum cocktail must have an appropriate container!

Baï makes everything by hand in Paris. In her studio, currently located at her home, a cartoon runs in the background on the TV, each step is carried out carefully, in a completely artisanal way. Watch her work on her mugs and you will soon be infused with her same passion. The work on every mug exhibits consistent attention to detail… see for yourself! 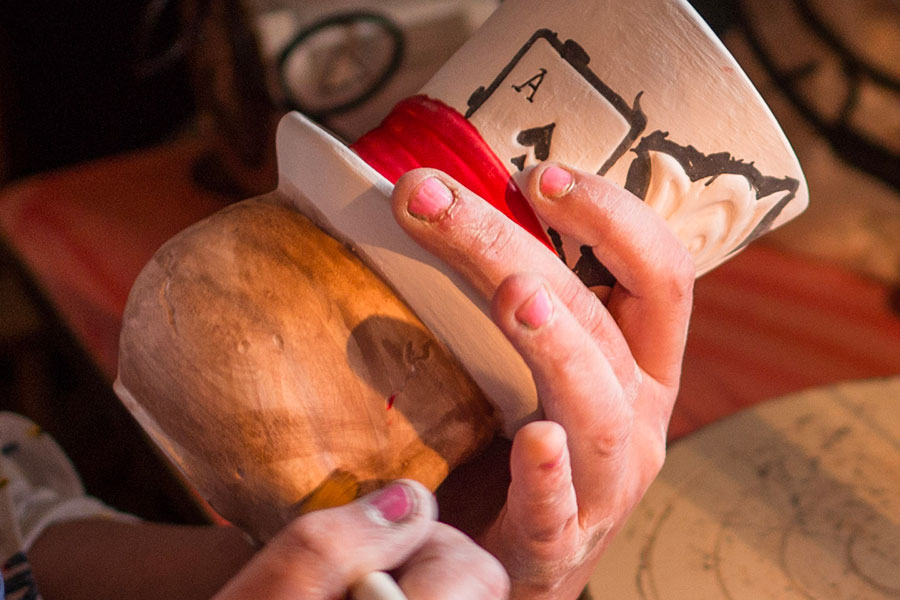 The production steps for you to enjoy a succulent Zombie or Mai Tai … and many, many others options

A prototype mug is created by modelling, which is then used to create a mould for a series. Each print requires liquid clay to be poured in which will take the impression of the mould, it is then baked, glazed with colour and then baked a second time. In the end, the mug will have spent almost two nights in an oven at a thousand degrees Celsius – which should make EDF rub their hands in glee – and Baï will have worked nearly forty hours just to get the prototype and its mould.

Baï exclusively works on small number of series and also on custom orders.

Note: Baï is also the featured illustrator for Plantation Rum