Mount Gay, the summit of Barbados

On this island, the birthplace of rum, as Barbados has been called for centuries, Mount Gay is a must-see landmark. This coral island, as flat as a pancake or almost – its highest point, Mount Hillaby “culminates” at 336 m – Barbados offers little in the way of hilly terrain, and it is pointless trying to find a so-called Gay Mountain on a map… Mount Gay has nothing to do with geography, The name refers solely to Sir John Gay Alleyne, who played a great role in the 18th century in the development of this distillery. 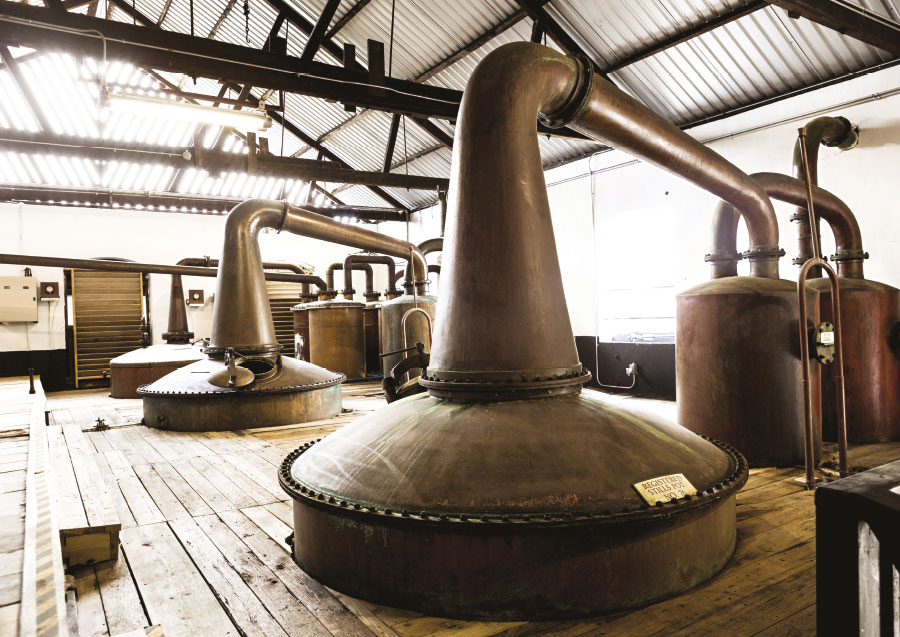 The explorer Pedro A. Campos discovered the island in 1536, and named it Barbados after the long aerial roots of fig trees that reminded him of beards, or Barbudos in his language. However, according to another source, the Genoese Explorer Visconte Maggiolo had already given the island the same name in 1519, after the bearded Caribbean Indians who inhabited the island at the time.

In 1627, the island was annexed and claimed for England by Captain Powell, on behalf of a London trader. A rare case in the Caribbean, this dependence on the United Kingdom lasted…until 1966! Even now, Barbados is still part of the Commonwealth, being a parliamentary monarchy with a Governor General representing Queen Elizabeth II. Less than ten years after its colonization, sugar cane was planted on the island by a certain Peter Blower alongside tobacco and cotton, and relatively quickly, the juice of the sugar cane was distilled directly to make rum.

This wasn’t to last: in 1642, a sugar factory opened and then molasses were distilled after fermentation. But Barbados Water was already known in London, as it was mentioned in a book, The Distiller of London, published in 1639. It is possible that artisanal distilleries existed on other Caribbean islands at the same time, however only Barbados has documents to prove it. Hence its claim to the title “Birthplace of Rum”.

The property upon which Mount Gay Distillery is located today claims that it dates back to 1654, however it is only a notarized act dated February 20, 1703 that establishes the existence of a distillery at that location. Nevertheless, this still makes it the oldest rum distillery still in operation. As for the origins of the name, it has two significations. The Sobers’ plantation is located on Mount Gilboa. But, like many other landowners in Barbados, he did not reside on the island, preferring instead the pleasures of London. 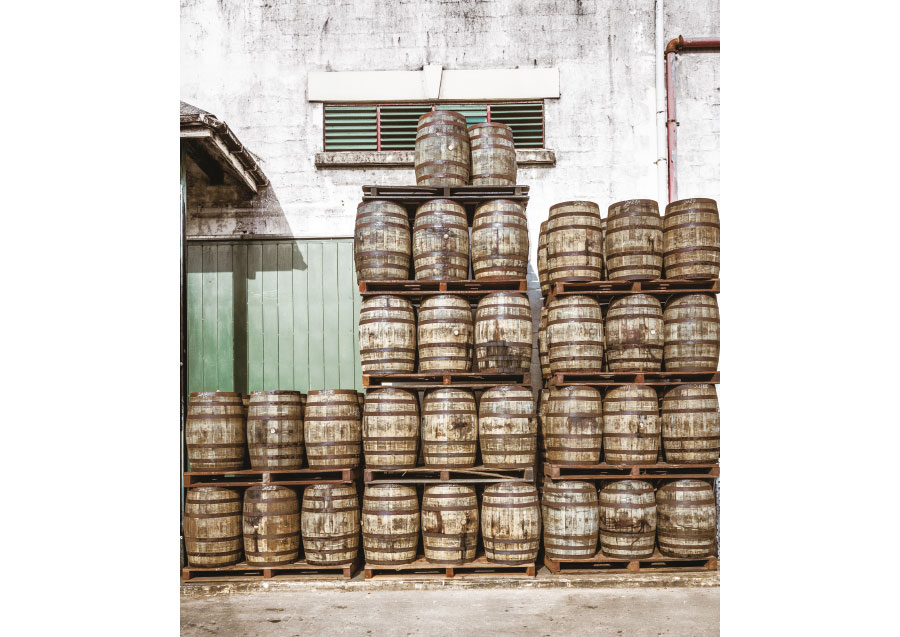 And so he handed over the management of his plantation to an authentic Barbadian, John Gay Alleyne, who was also a baronet, a member of Parliament and a benefactor of the island, as he helped to set up its first school. Upon his death in 1801, the Sober family wanted to pay tribute to his memory by naming the distillery and its rums after him. However, at the time, there was already a company called Mount Alleyne. So they settled on Mount Gay, which was to be used for centuries to come as the name of origin, both geographical and historical.

In the 18th and 19th centuries, rum production in Barbados experienced some serious turbulence. Whereas in 1763 the island was one of the largest producers of rum in the Caribbean, by 1812 it ranked only fourteenth. The situation then improved somewhat, only to deteriorate again in the second half of the nineteenth century after the abolition of slavery in 1838, resulting in a ten-fold fall in exports between 1864 and 1876.

Under pressure from London traders, a 1906 law prohibited British West Indies distillers from bottling their rums in containers smaller than ten gallons, or 37.8 litres. This prevented rum producers from developing an autonomous trade policy and left the metropolis with a quasi-monopoly of the sale of bottled rum.

Furthermore, Aubrey Fitz-Osbert Ward, who became the proprietor of Mount Gay in 1918, created a company named Mount Gay Distilleries Ltd along with two partners, which, from 1926 onwards blended, bottled and marketed the distillery’s rums. This company was the sole owner of the trademark. Being the only distillery on the island that could market and bottle its rums, Mount Gay’s international fame grew rapidly, with exports to 14 different countries as early as 1958, and to about 40 countries by 1976. But the situation become more difficult in 1974, when the company sold a large ownership stake (up to 60%) to Foremost-McKesson Inc., previously Mount Gay’s agent in the United States. They decided to transfer bottling operations to the United States, importing rum in bulk. 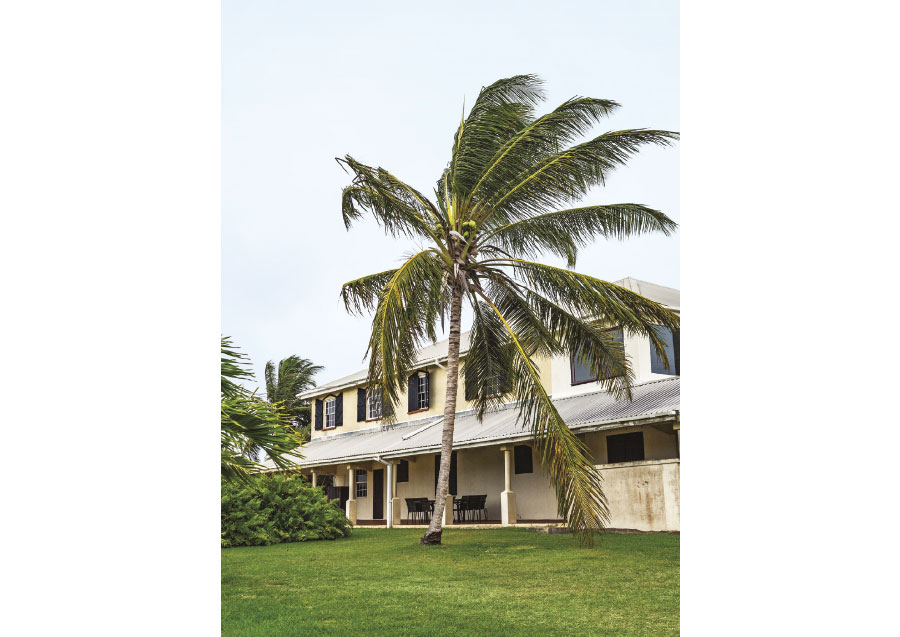 Fortunately, in 1989, the French company Rémy-Cointreau bought 96% of the capital of Mount Gay distilleries Ltd, the remaining 4% still belonging to Bajan shareholders, the Ward family and Hutson descendants, creators of the Eclipse brand. White rum was subsequently launched, in addition to other product ranges. In 1991, Extra Old, the first aged rum was launched. The latter, later renamed XO, was created by Master Blender Jerry Edwards and is the first rum to open this segment. The Ward family remained the owner of the distillery and, in 2006, current owner Frank Ward began producing a triple distillation rum that he would market himself for a few years in limited quantities under the name Mount Gilboa, the very first name of the distillery!

Things had gone full circle. Mount Gay now uses some local molasses but the majority is imported from the rest of the Caribbean. As for the water needed for fermentation, it comes from a well dug all the way down to the groundwater table on the property itself. Distillation takes place in four double-retort copper pot stills, two manufactured by McMillan in Edinburgh at the end of the 19th century, and the others by Fragasa. As for the 100% copper column still, which was withdrawn in 1974 by Mackesson and replaced by a traditional column still, it is currently being restored by John Dore in England and will be back in use from December 2018 onwards. Pot still and column still distillates are aged separately in American “Grade A” (first use) oak barrels previously used to age bourbon or Tennessee whisky.

Thanks to the contributions of other companies in the Rémy Cointreau group, Mount Gay distilleries also uses French oak barrels which have been used to age cognac and barrels that have been used to age Islay Scotch whisky. Mount Gay distilleries also source barrels from Spain (sherry, XP) or Portugal (port wine). The aged distillates are then assembled by Master Blender Allen Smith according to his recipes. All that remains is for this brand to gain international fame, but, with its 300-year old reputation, Mount Gay shouldn’t have to worry too much, at least not for a few more decades… 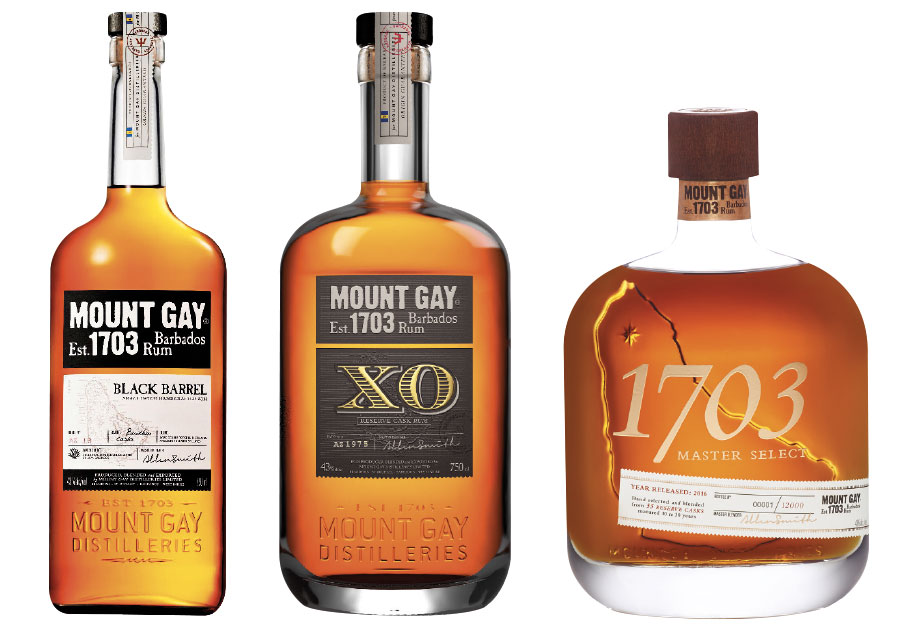 Silver (43°) is a white rum made from one spirit distilled in a pot still and another from a continuous column, a blend which combines strength and aromatic finesse. It is aged in whisky barrels before being filtered and then bottled. It is now only available in the Caribbean.

Eclipse (43°), the true emblem of the range, bears this name in memory of the year 1910, marked by a total solar Eclipse, and the passage of Halley’s comet. This unaged blend may seem a little “simple” at first to the nose, but then reveals a beautiful elegance and a great aromatic finesse, with dried fruits (currants), dried banana and a little vanilla. The finish is marked by a little smoke, oak and spices.

Mauby Rum (43°), a spiced rum distilled with mauby bark available for the local market only.

Black Barrel (43°), which was released in 2013, is also a blend of two types of distillate (but mostly pot stilled) whose great originality lies in the fact that it is matured in charred barrels, which gives it particularly interesting smoky notes, which is rare in the world of rum. Yet it is also very mellow, with notes of vanilla and golden raisins, tinged with black pepper. Lingering notes of tannin and vanilla.

XO (43°), or Extra Old, reminds us of the current owner’s brandy origins. It is a blend of rums between 8 and 15 years of age. In Barbados, it is commonly referred to as Mount Gay Black. The nose is powerful, particularly oaky, but develops with a certain softness. On the palate, it has an aromatic richness (dried fruit, toasted almonds), but also a strong tannic presence that dominates the finish and lingers for a long time afterwards.

1703 Master Select (43°), launched in 2009, is a blend of more than 40 rums between 10 and 30 years of age, is exceedingly mellow (as its round bottle suggests) and of a rare elegance. Available in limited quantities, it is the pinnacle of the range.

If you have the courage to search them out, the brand also offers some other very limited but very interesting cuvées: An XO cask strength at 63° for the 50 years of Barbados independence (3,000 bottles) and two Origin Series at 43°, the first (2016) had for its theme distillation in copper column vs. copper pot still and the second (2017) aging in charred casks vs. virgin casks, finishing in toasted bourbon barrels vs. toasted French oak barrels.