In just a few years, this Irish barman conquered New York and on October 7th, The Dead Rabbit, his first big apple bar founded with acolyte Jack McGarry, took first place on the prestigious “The World’s 50 Best Bar” list. Today, this entrepreneur of mixology turns his interest to Cuban culture with BlackTail, an unprecedented concept that puts rum in the spotlight. Introducing this key player on the global scene….

Born in Belfast in the 1970’s, at a time when the country was ravaged by civil war, Sean Muldoon dreamed of becoming a rock star.  Life decided otherwise. At the age of forty, this Irishman is now a “startender.” Yet the beginnings of his professional life hardly foreshadowed such ambitions: food jobs, a brief stint in the French foreign legion, the beginnings of a singer-songwriter career. He took up the shaker in the early 90’s as a means to pay the costs for his first CD. Fast forward a few years and the bartender’s life took over and become his personal passion. In 2006, he joined the bar team at the Merchant Hotel where he met his future associate Jack McGarry. Quickly, he embarked on an audacious project to make the Merchant Hotel bar one of the best in the world. He introduced the concept of “Haute couture” cocktail with options like the 750€ Mai Taï made with J. Wray & Nephew 17-year-old rum, used by the great tiki-master Trader Vic Bergeron more than 60 years ago. Muldoon succeeded and the Merchant Hotel bar was named “Best Bar in the World” at Tales of the Cocktail in 2010. But, Sean Muldoon didn’t confine his ambitious to Ireland. He decided to cross the Atlantic with Jack McGarry. The duo set up The Dead Rabbit in south Manhattan’s Financial District. The name refers to a gang that was particularly active in this neighbourhood in 1850. With his associate, Sean Muldoon has created something tangible inspired by the written works from the cream of the crop of mixologists: Jerry Thomas, Harry Johnson, William Schmidt, Louis Fouquet and William Terrington.  And his hard work has made The Dead Rabbit the best bar in the world. Sean Muldoon continues to feed his passion for cocktails through BlackTail and the American bar school in Cuba.

Let’s find out more from the man, himself:

Rumporter: When did your passion for cocktails begin?
Sean Muldoon: 1998, in Belfast. I had already been bartending for 6 years at the point when I decided to take it seriously.

Rumporter: How was the The Dead Rabbit, the first bar you created with Jack McGarry, inspired by Irish culture?
Sean Muldoon: The Merchant was inspired by venues like The Library Bar and Milk & Honey in London. But when we had visits from key industry players, Gary Regan and Dale DeGroff, we noticed they split their time between The Merchant and The Duke of York, a traditional Irish bar across the street. The idea for The Dead Rabbit came from mixing those two concepts and bringing the Irish Pub into the 21st Century.

Rumporter: Did you think that The Dead Rabbit would win the title of Best Bar in The World?
Sean Muldoon: Yes, I knew it would. When I started at The Merchant I told Bill Wolsey, the owner, that I would make it the best bar in the world. In 2009 we won three Tales of The Cocktail Spirited Awards and in 2010 we won World’s Best Bar. I knew we could do the same with The Dead Rabbit.

Rumporter: Is rum a main feature at The Dead Rabbit?
Sean Muldoon: No. The Dead Rabbit is about Irish Whiskey, and we have the largest collection in America. We carry rum, and it features on the menu, but it’s not at the forefront of what we do the way it is at BlackTail. 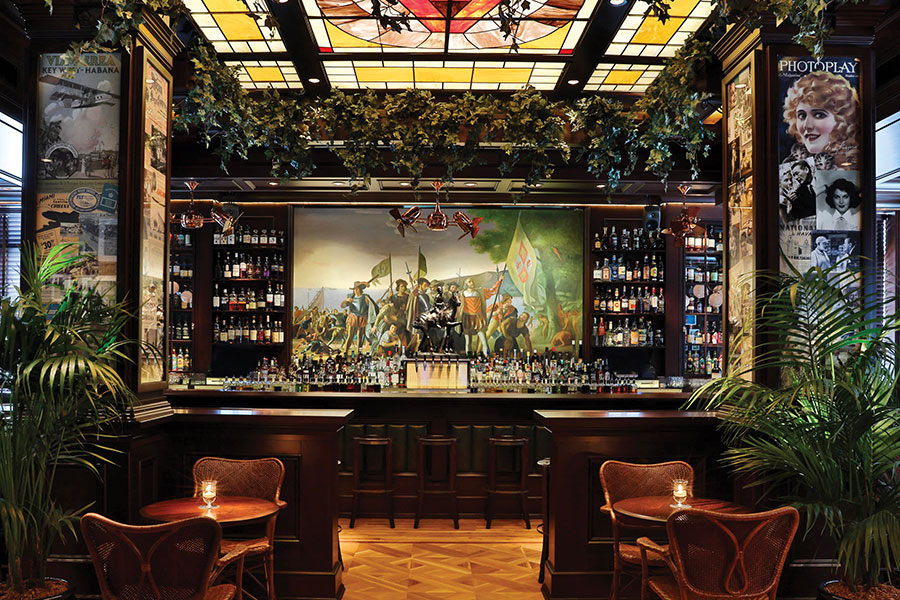 Rumporter: First Irish culture with The Dead Rabbit, now Cuban culture. How well did you know Havana and its cocktail scene before opening BlackTail ? What is the concept of BlackTail?
Sean Muldoon: I spent my honeymoon in Havana.  It was at that moment that the seed was planted for BlackTail, long before The Dead Rabbit opened its doors. The name of the bar comes from a historic fleet of seaplanes whose tails were painted black. They were like aerial yachts commuting to and from Cuba. The ban on alcohol in the US forced the cocktail scene to exist in secret, with drinks of dubious quality in shady places. And Cuba directly benefited. Most high-level bartenders settled on the island and set up their own establishments. And with that, the Cuban cocktail scene and culture really ramped up during that period. This golden age of the cocktail in Cuba is what we wanted to present with BlackTail. Even in its decor! We reproduced the typical American bar complete with the same woodwork, palm trees and large ceiling fans. On the back bar, bottles are interspersed with more design elements like a statue of José Martí, an apostle of Cuban independence, and an impressive oil painting by American painter John Vanderlyn: Landing of Columbus portraying Christopher Columbus and his crew on their arrival to the New World in 1492. The original work is in the Capitol in Washington DC.

Rumporter: Did you search for information and inspiration in history books, bars or brands before creating the BlackTail concept? And, which ones?
Sean Muldoon: A large part of BlackTail is influenced by Ernest Hemingway, so his writing, memoirs and biographies provided a lot of inspiration. We visited his residence in San Francisco de Paula, Havana, where he lived for 20 years, and earlier this year I visited Wyoming, Montana and Idaho, where Hemingway died. I have toured the bars he frequented in Europe and his home in Key West, Florida, to which, along with Havana, I am returning soon. In terms of history, BlackTail is centred around pre-Castro Cuba, 1920’s – 1960’s, before the revolution. So we researched that, the film, literature and culture, but we didn’t go back any further than 100 years.

Rumporter: How is your menu designed? What type of cocktail do you offer? Which brands of rum do you work with?
Sean Muldoon: The menu is presented in 88 pages, designed by the Drinksology agency, the same team that created the menu for The Dead Rabbit, which was named World’s Best Cocktail Menu in the Tales of the Cocktail Spirited Awards in both 2013 and 2015. The design depicts a New York and Cuban 1920s landscape and BlackTails. The drinks portion of the menu is divided into 5 chapters: Highball, Punch, Sour, Old-Fashioned and Cocktail. In total there are 40 cocktails, complemented by 8 seasonal cocktails, all created by my partner Jack McGarry with Jesse Vida, Head Barman and Bar Manager, and Jillian Vose, our Beverage Director. It is a true tribute to the culture of the American bar from 1920 to 1950. All cocktails are inspired by recipes reinterpreted for today’s tastes using the latest techniques like sous-vide. You will discover the Rum & Cola, the Mary Pickford, the Daiquiri or the revisited Presidente. The menu includes a second section “Destination Havana” written by Jared Brown, cocktail historian, master distiller and journalist. He imagined the story of Paul Conway, a cocktail journalist, who went to Cuba to meet Ed Donovan, accompanied by Don the Beachcomber’s grandfather. And a third and final section covers the history of BlackTails.

Cocktails are not made with Cuban rum (Editors note: rather it’s a sort of Cuban inspiration, since Cuban rum currently cannot be imported to the US). The bar uses rum from Puerto Rico, Panama or Guyana. We also produce our own blend of “Cuban” rum based on Bacardi Heritage, Caña Brava, Barbancourt White, Banks 5, used for daïquiris.

Rumporter: BlackTail opened about the same time Barack Obama announced the end of the Cuban embargo. Was that a coincidence?
Sean Muldoon: This was a complete, but happy, coincidence.

Rumporter: How is the Cuban cocktail scene evolving?
Sean Muldoon: The Cuban cocktail scene has stopped evolving. Back in the day when the Americans were there they had a lot more fresh imports, fresh fruits and things like that. Now everything is bottled premix and you can’t get a lot of the liquor that you got back then, so we’ve taken what they had pre-embargo, the former glory of Cuba, and improved it. There’s only so much stuff they can get in Cuba now; we have more fresh and diverse ingredients available to us here.

Rumporter: Cuba is currently a hot topic in the United States. Is it the same with rums and Cuban cocktails?
Sean Muldoon: I think people are always interested in what they can’t get so there is a fascination naturally with things like Havana Club and Cuban cigars so when they become legal in the US, which they will, everyone’s going to want them. Cuba was America’s playground during prohibition, it’s 90 miles off the coast of Key West, it was very accessible. It’s where a lot of Americans went during Prohibition but they can’t go there anymore. We’re bringing things back the way they used to be, the drinks the way they used to be, and the way the Americans enjoyed Cuban rum and Cuban coffee. It’s because people can’t have it that they’re so interested in it.

Rumporter: New York is the cocktail capital of the United States. Many cocktail bars over there work with rum. Could the Big Apple also soon be the US capital of rum?
Sean Muldoon: Not necessarily, Miami and San Francisco have an interest in Cuban Rum. NYC won’t be the capital of Cuban Rum.

Rumporter: Cuba, Jamaica, Martinique: are these the main rum origins a cocktail bar should mix with?
Sean Muldoon: Well the Caribbean is a big place. Cuba and Jamaica are Caribbean. Venezuela, Guyana and Panama for instance are part of South America, not the Caribbean. Australia also does some good rums, Indonesia does Arrack, Brazil does Cachaca etc. 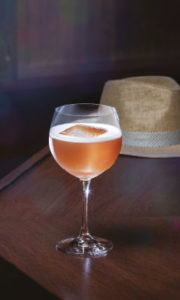 A great Cuban cocktail classic, made with a house rum blend. 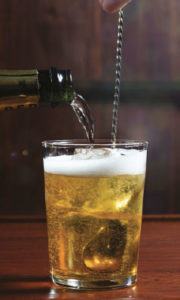 A revisited version of the Cuba Libre and one of the bar’s signature drinks.